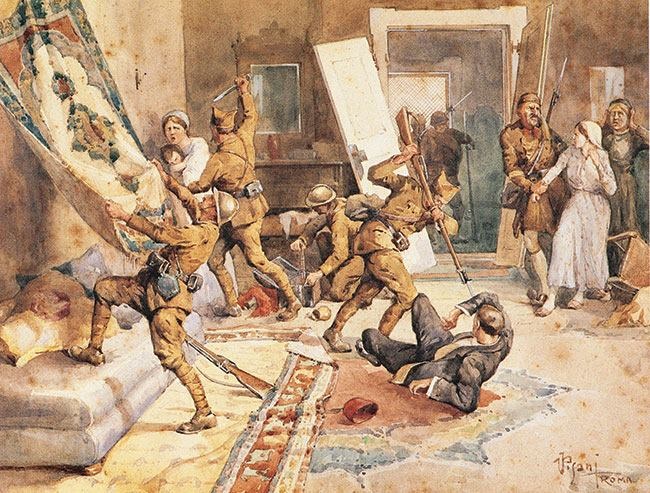 When Sultan Mehmet II completed the conquering of Morea peninsula in 1460, the southern edge of modern Greece, he was received as a deliverer by the Greek Orthodox Christian population suffering under the rule of the Roman Catholics. Professor Dr. Douglas Dakin, who was an expert on the history of modern Greece said in his book that “(Morea) inhabitants found the Turkish rule preferable to that of the Venetians; taxes were lighter; the administration was less harsh and the (Ottoman) was much more tolerant than the Roman Catholic.” However, 360 years later, Greek terrorists launched one of the most savage slaughter campaign humankind ever witnessed which eventually led to Greek independence.

On the eve of the rebellion, the Greeks in the Ottoman Empire were leading relatively peaceful and prosperous lives, whilst those with wealth and education found employment in the Ottoman government service, according to several western sources. Poisoned by France, Russia and other western powers, Greeks began their rebellion in the Morea (Peloponnese) on 6 April 1821 with the slogan: “Not a Turk shall remain in the Morea.” Over 40 thousand people mostly Turks but also Albanians, Jews and even some Christians have been ruthlessly slaughtered in matter of weeks. The Morea Peninsula had 50 thousand Turkish population prior to the genocide and there was hardly anyone and any Turkish legacy for that matter left in the area after the genocide.

Morea slaughtering was so barbaric, even some European mission officials either asked for resignations and replacements to move out of the peninsula.

According to British Colonial Office and Foreign Office documents, “Turks were slowly burnt to death on a fire, after their arms and legs where chopped off’. “Naked women plunged into the sea, and were shot in water; children were thrown in to drown, and babes were taken from their mothers and beaten against the rocks.” This so-called “Greek war of independence” was hardly a war at all in the conventional way, but mostly a series of “opportunist massacres.”

In 1825, the army of Ibrahim Pasha, the son of Mehmet Ali Pasha, governor of Egypt, began to reconquer Morea, all those Greek rebels who surrendered were spared. The West, which closed its eyes and ears to the extermination of the Turks in Greece, began to raise its voice aganst the Ottoman reaction.

The Greek barbarism was saved by the intervention of the European powers. Favouring the formation of an autonomous Greek state, they offered to mediate between the Turks and the Greeks (1826 and 1827). When the Turks refused, Great Britain, France, and Russia sent their naval fleets to Navarino where, on October 20, 1827, they destroyed the Ottoman fleet. Although this severely crippled the Ottoman forces, the war continued, complicated by the Russo-Turkish War (1828–29). A Greco-Turkish settlement was finally determined by the European powers at a conference in London; they adopted a London protocol (February 3, 1830), declaring Greece an independent monarchical state under their protection.

Hundred years on, Greece still aggressively aims to gain water rights in the Aegean against Turkey with the help of the west. This time, however, it faces a replenished nation and divided Europe.