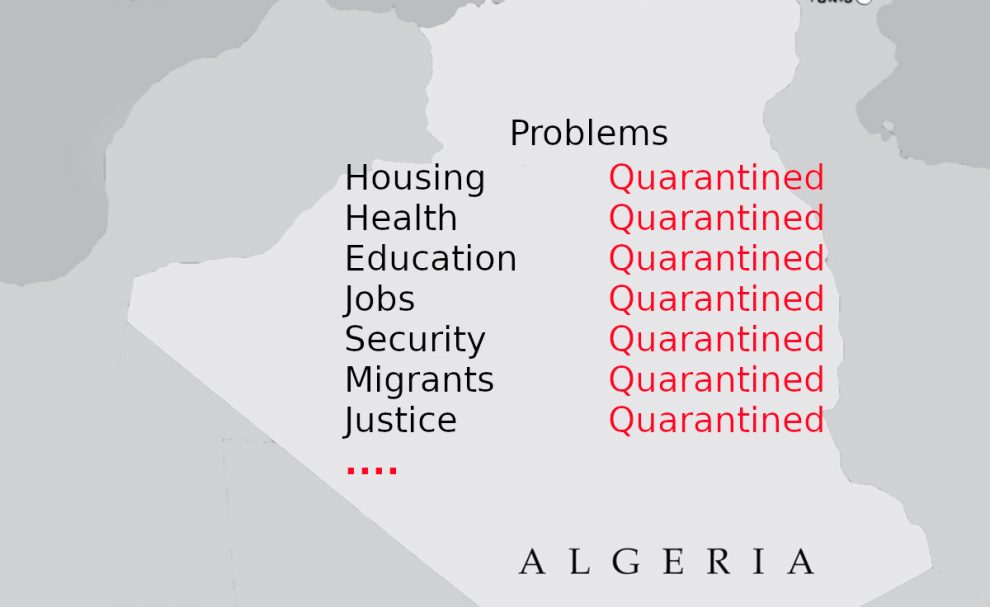 Algerians are simply posing the question that the country’s nomenclature does not want to hear: One, two, three où va l’Algérie? (Where is Algeria heading?)

Crisis events are piling up in Algeria, ranging from socioeconomic errors, which might cause major inconvenience, to inflation that seriously impacts people’s purchasing power and level of prosperity, fomenting inequality in security and justice. Such events can affect people’s ability to pay bills, trust food sources and provision, including events that have impacted the environment and daily lives for decades.

This week more than 9 million children are back to school, and thousands of public servants are back to work; this has considerable cultural significance bearing on the work component in Algeria and elsewhere in Arab and European Mediterranean countries ; coming after the long summer break, it is the time when public administration services, social and commercial activities, and academic and political occupations start again in earnest.

Exasperation toward the government’s failed public policies and economic reforms, in terms of housing, health, education, jobs, security, migrants and justice have pushed the people further to quarantine. However, this anger is hardly surprising. The analysts who have been following the Algerian situation are predicting a serious social explosion in spite of the overbearing attitude of the government and the regime toward the people.

Recently a deadly epidemic occurred in the country’s northern provinces. For many public health and prevention experts this epidemic is the result of decades-long poor political judgment and an incompetent management and development policy in the municipalities overall. The source of this virulent epidemic came from polluted irrigation water and an inadequate purification and sewage system.

Pressed to the point of exasperation people have had enough of nothing. They might take their battle to the street, as Professor of Sociology Boumahdi put it, venting their frustration in an effort to ensure that this time they might be heard. Ironically, the same people, notably are the youth who have been chanting for years: One, two, three viva l’Algérie to demonstrate their national pride and support for the Algerian soccer team, whose record has been mediocre like the regime’s government performance.

Last month’s public health crisis added yet another layer to the socioeconomic struggle of Algerians in this tough and rough month of September, which has become a nightmare to thousands of parents because of the skyrocketing cost of school supplies and clothes. As one parent told me, on a phone conversation: “I have three kids who are in elementary and Junior High, I have been saving for this moment since last April, otherwise, I would be fooled by my kids, and worse, [we] don’t know if they would excel!”

He continued, “the eldest is doing well, he could go far, he wants to join the Military Cadet School.” In perspective, it’s a safe path for the pupil and his parents. Djilali is a public servant officer in his municipality City in south Algiers. Other parents are complaining about the public system program and curriculum. Newly graduated teachers are also raising the question of the Education Minister’s orientation toward the teachers retiring from public school and joining the private school system, to them just another lax element in the sector employment policy.

For the majority of Algerians the era of President Bouteflika’s presiding years are over — Algerians today are looking at the President with poignancy and heartbreaking sentiment when they see or hear about his health. Last week Algerians went nuts on social media about the President’s urgent dispatch to Geneva, Switzerland for his periodic medical checkup. People and the amateurish so-called independent media were speculating about his death and life.

The people are simply posing the question that the country’s nomenclature does not want to hear: One, two, three où va l’Algérie? (Where is Algeria heading?)

For politicians in the town, pros and cons alike, it’s a mistake to bet on pessimism; however, when leaders become silent and people don’t have anything left to hope for, they turn to cynicism and rumors. As a result, they lose trust in their political leaders, who must confront their voters. This is the nature of politics.

In a crisis, those in power need to respond directly to the legitimate needs of the people, reassure them and answer their questions if they want to earn the public trust.   In other words, credibility. Failure to do so alienates the people leaving them feeling disconnect until election when the officials need their votes. As soon as the polls are closed they don’t care about their demands.

Algeria’s problems continue to grow and the relation between those in power and the people is deteriorating; the ‘cocaine scandal’, and the firing of Algeria’s homeland security chief has worsened this relation, adding to the on-going social conflicts. Doctors, teachers and even stewards/flight-attendants are ready to take to the streets. Algerians are on the eve of a crucial presidential election next spring, posing the Shakespearian question will President Bouteflika run for a fifth term in April 2019 or not?

Yet, his urgent dispatch to Geneva Hospital has made the pros’ case weaker, the soft opposition is pushing for a consensual candidate; meanwhile, the romantic one is advocating for “C” changes and the application of the article 102 of the Constitution. On the other hand, a scenario is underway within the nation’s strongest institution (the Military), and discussions are in process with Paris and Washington for an ideal President, according to a western diplomatic source in Paris.

Nonetheless, in this matter, people are asking for small changes in leadership that could produce big changes in their daily lives, and leave politics for the seniors (lel-k’bar). Translation, “[we] don’t care.”

People feel betrayed by the hope they had placed in President Bouteflika nineteen-years ago. Others, however still argue, Algeria is better off under President Bouteflika’s presidency because he succeeded in ending the bloody war against the civilians and brought the country back to the world stage.

The country, though is in a political morass and its reputation is in a deplorable state. Some have gone so far as to describe it as worse than the dark decade of terror when corruption, nepotism and social injustice prevailed. Then it was the nation’s social cohesion in question; nevertheless, current events befalling the country have gone too far when hard drugs epidemic outbreaks and management incompetency reflect the Sicilian mafia style.

This is clearly a sign of an unhealthy political system. The people are worried and are concerned about the country’s future. What is taking place at the summit of the regime leads neither to prosperity nor stability nor security: platforms on which President Bouteflika ran in 1999.

Thus, Algerians are asking how long President Bouteflika and [his] circle will let special interests steal the country’s wealth. They are also questioning his Premier about the ‘cocaine scandal’ investigation, and his Health Minister responsibility in wake of the cholera outbreak. To them these are not banal law-and-order or public health cases, it is a political tragedy that occurred in the middle of the day in the heart of the country’s shores and plains.

The people have even been asking about the President’s life: Is he alive? Like Hamid, an Algerian Human Rights Activist in Paris, said: “Algerians are tired of the coded language from the President’s entourage and their media via communiqués. Algerians want his circle to fight for them and not frighten them. They want their country to move forward to lead and not to bleed again”.

In circumstances like these, there are so many questions, and  Algerians deserve answers from their leaders. So, both the President’s advisers and his policymakers must work harder to satisfy the people’s quest for social justice, prosperity, and security if they want them to bring an end to heir distrust and despair.

The Turkey-US standoff over S-400 missiles
Are Turkey and USA really allies?
Comment