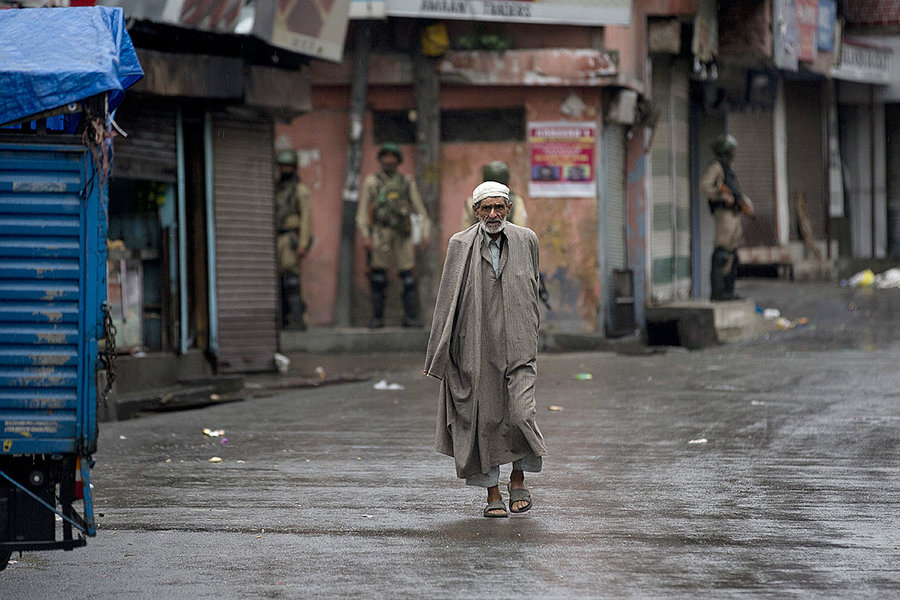 ANKARA – The United Nations has been urged to take steps to halt the impending demographic changes in Indian-administered Jammu and Kashmir (hereby Kashmir).

An online petition, launched by Legal Forum for Kashmir (@lfovkofficial) addressed to UN Chief Antonio Guterres and members of UN Security Council (UNSC) demands that India should comply with its international obligations in Kashmir pursuant to UNSC resolutions and other bilateral treaties and international covenants.

Fear is gripping in Kashmir ever since India imposed new residency laws in the disputed territory early this year which make citizens of India eligible to buy land, apply for public jobs in the region.

On #KashmirSolidarityDay this historic picture from the UN archives is another reminder of how the promise to hold a plebiscite has remained unfulfilled pic.twitter.com/TJnpXTCY02

The new laws were brought by India after scrapping so-called limited autonomy – termed as “re-annexation” by many Kashmiris and Pakistan – of the region under Articles 370 and 35A of the Indian constitution in August 2019.

Kashmir is a Muslim-majority region and natives fear this is a tactic by India to swindle the majority community numbers in to minority.

“Member states of (UN) Security Council should refer this case of illegal annexation and demographic change in disputed Jammu (and) Kashmir for advisory opinion to ICJ (International Court of Justice),” the petition demands.

There are 20 resolutions passed by UNSC and UN General Assembly (UNGA) since 1948 call for referendum in Jammu and Kashmir – that existed before 1947 when India and Pakistan were born as independent nations – to decide its political future.

Since 1947, Kashmir is divided under India (Jammu and Kashmir) and Pakistan – internationally known as Azad Kashmir after its natives fought against the then autocrat Hindu ruler Hari Singh and freed part of the region to join Pakistan. The plebiscite, according to UN resolutions, whenever, is to be held in whole of the region.

UNSC held two meetings after India unilaterally changed the status quo of the territory under its control last August. Though no statement was issued after meetings concluded but it was termed as a “big break through” since Kashmir file was revised at the UNSC table.

The petition has also demanded an independent war crimes tribunal to decide cases of gruesome rights violations in Jammu and Kashmir.

As we mark #KashmirSolidarityDay tomorrow, here, as historical recall, is a picture from the UN archives said to be of the first ever meeting of the UN Security Council on Occupied J and Kashmir pic.twitter.com/tu1197GidC

Latest reports say 102 armed rebels were killed by Indian forces in Jammu and Kashmir since January this year. Most of the slain rebels died after the COVID-19 pandemic affected Indian-administered Kashmir despite the fact UN had called for ceasefire by the warring parties.

Office of the United Nations High Commissioner for Human Rights has documented two reports released in 2018 and 2019 that besides flagging concerns over abuse of rights of Kashmiris calls for respect to the right of self-determination (plebiscite) of the people of Kashmir as protected under international law.

Kashmiris launched armed resistance against the Indian rule in late 1980s and until now, many rights groups say, nearly 100,000 Kashmiris have lost their lives, over 8000 Kashmiris have been forcibly disappeared allegedly by Indian troops, property worth billions of dollars have been destroyed in anti-militancy operations.

Number of active armed rebels varies from above 200 to below 500, in most scenarios.

On #KashmirSolidarityDay, as historical recall, this is another picture from the UN archives of one the earliest meetings of the UN Security Council on Occupied Kashmir pic.twitter.com/uUaSfzyYRM

Meanwhile, expressing happiness over election of first envoy of Turkey as president of the next UNGA session, Kashmiris are pining hopes that resolution regarding the disputed territory would be taken into consideration during this one-year term.

In a letter addressed to Ambassador Volkan Bozkir, the first Turkish diplomat elected last Wednesday to preside over 75th session of UNGA from September this year, Kashmiri lobbyist Dr Ghulam Nabi Fai, said: “If the people of Indian-occupied Kashmir had the freedom to express their sentiments, you would no doubt have heard their loud voice rejoicing at the fact that the distinguished representative of brother country – Turkey – is presiding this year over the parliament of nations.”

Thanking Turkey’s President Recep Tayyip Erdogan “for giving hope” to Kashmiris, Fai urged Bozkir to “exercise your good offices to mediate between Pakistan and India for promoting a solution of the Kashmir dispute in accordance with the resolutions of the Security Council.”

He said the resolutions were “meticulously” negotiated between the parties – India and Pakistan – and accepted by each, adding: “They thus embody a solemn international agreement.”

“They were endorsed repeatedly by the Security Council and by successive United Nations representatives,” said the WKAF secretary general.

Fai also noted that Turkey is in favor of resolving the Kashmir issue by taking into consideration the expectations of our Kashmiri brothers, through dialogue based on UN resolutions.