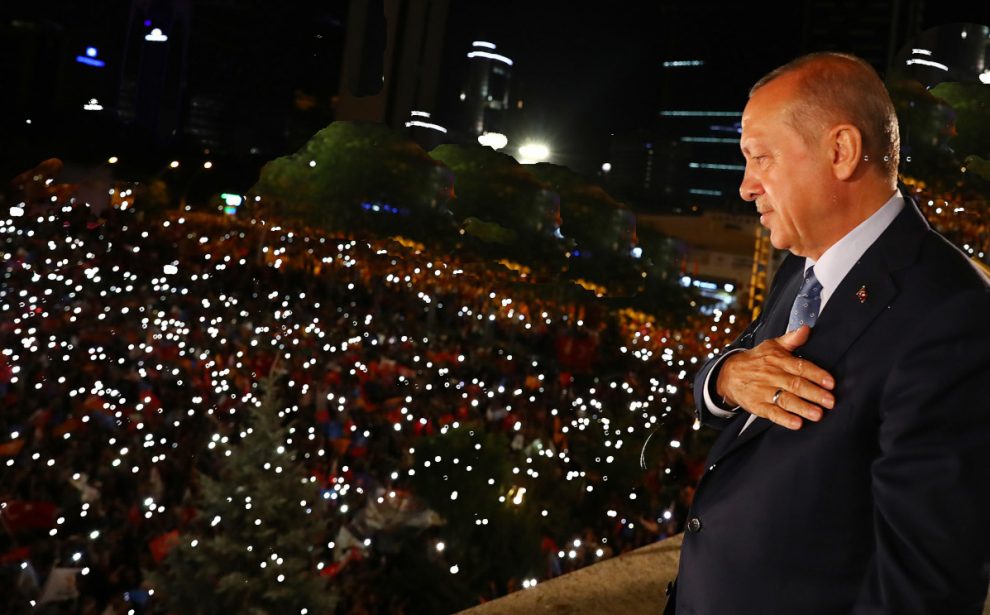 President re-elect Erdoğan is realistic about the challenges he faces in leading his nation domestically and regionally.

President re-elect Recep Tayyip Erdoğan has officially become the first elected President of the Second Republic of Turkey, and the 12th President of modern Turkey in a massively manifested civilian vote ever in the history of the modern Muslim nation-state.

On Sunday hundreds of thousands of Muslims and Arabs watched the re-elected leader at the AK Party balcony headquarters congratulating his supporters in Ankara, telling them “… from now on, its time for us to work harder.” He continued: “[the] winner tonight is Turkey, the Turkish nation and its people, and the suffering region and “this victory is for all the oppressed in world.” In terms of language elements, the victory is the victory of the voiceless in the Muslim world.

Unlike in Arab countries, election nights for the people are either traumatized by the regime’s outcome or cynical about their future. In a calm speech, President re-elect Erdoğan managed between rhetorical lines, historical references and the way forward to ensure his nation and people. The general mood was celebratory and conciliatory; it was a vivid image one could wish for in an Arab country, Arabs used to watch the incoming President was sworn on the Koran before his general peers and cronies, reading long, boring pages of an indoctrinating speech.

Turkish President Tayyip Erdogan and his wife Emine Erdogan pose as they arrive to address their supporters from the balcony of his ruling AK Party headquarters in Ankara, Turkey, early June 25, 2018. Kayhan Ozer/Presidential Palace/Handout via REUTERS

However, this time in Turkey it was quite similar to what the Arabs watch on TF1 or NBC on election nights in the U.S. and France, where elected presidents go out to congratulate the voters for their civility and their opponents for their political elegance.

Arabs can do as well, and they can elect “normal” presidents as soon as they exhibit the norms of the healthy democratic process as was initiated in Turkey three decades ago. The possibility is there, despite all the clichés and paranoia of the local elite and the international media that still “know better” and decide for the Arabs and see them as minors or worse, not mature enough, or not at all. But not in Turkey.

Turkish voters have been proving the biased international media wrong again and again, and stunning Turkey’s political observers and analysts at every election. Meanwhile, the world is experiencing a new generation of leaders in the Arab republic countries, and it is worried about them because the outcome won’t please them; for instance Algeria in 1992, Egypt in 2013 even President Erdoğan had survived a failed coup in 2016.

Western diplomatic missions in Arab capitals watch carefully any move that doesn’t coincide with their national interest or poses a threat to their “protégé”. This has unmasked the ugly face of this strategic attitude to contain the Islamists and the independent liberals in the wake of the Arabs’ Spring, the counter-revolutionary and reform movement led by Arab States like the UAE and KSA that prefer political and economic injustice to thrive and see Arab people to starve.

This should not, however, be an issue, since the legalist-Islamists and the independent liberals like former Tunisian President Dr. Moncef al-Marzougui are working together, easing peacefully into the political process, defending the nation’s republican values and customs and believing in their people’s will, as does President re-elect Erdoğan.

He and his party are no longer talking about an Islamic State or even using the slogan, “ISLAM is the solution” (al-Eslam houa al-hal) in their political campaign, as he and his party are portrayed by the Western media. Actually even the Brothers in Egypt and a-Nahdha in Tunisia didn’t capitalize on this doctrinal slogan dating from the 70s, but this was not mentioned, and secular voters are voting for so-called Islamists, traditionalist/religious voters are voting for secularist parties like the SP party voters who voted for CHP candidate. It sounds odd, but it what it is in Arab and Muslim politics.

Yet the President re-elect is still painted as a Brotherhood leader and the leader of International Islamism by the Westerners and some of the Arab counter-revolution and reform Arab media — nonetheless, he still talks about the social order and the complex issues, the economy and national security, like any Centrist-right Christian party leader in Europe like the CDU in Germany, MoDem of Bayrou in France or People’s Party in Spain.

Thus the task is going to be difficult for President re-elect Erdoğan, but he would do well, he is aware of Turkey’s cogs-politics and macro and micro-economics imperatives. He will be attentive to the voters’ message from Sunday’s elections, primarily to his party; the AK Party dropped by seven points in comparison to November, 2015 Legislative election’s result, 49.49% in 2015 and 42.4% in 2018.

From this angle the President re-elect realizes voters have given him a clear capital political mandate (was re-elected by 52.2 %) according to Anadolu Agency, to officially institutionalize the Second Turkish Republic and govern with a favorable Parliament, enhancing a Presidential system that looks closer to the U.S. Presidential system rather than the French one. It is not an authoritarian drift as it was emotionally declared in catchy news’ titles on Monday’s French front pages.

President re-elect Erdoğan is realistic about the challenges he faces in leading his nation domestically and regionally.

He doesn’t want to deceive and this is why he talks about the civil state and the republican model. The idea of a theocratic or an oligarchic state is the Western media and the bankrupt nostalgic Kemalist opposition obsession, the AKP party and its leader are pragmatic Nationalo-Islamists who learned from the mistakes of their Brothers in Sudan, Syria and Egypt. They are adapting the mechanism of the democratic process and the socioeconomic progress to provide the best for their fellow citizens.

What ever President re-elect Erdoğan will do, his detractors will continue to see him as a “dictator” and he rapped the Constitution and Ataturk’s Turkish republican values. Whether he believes in it or not, it should be left to others to psychoanalyze. He is not going to copy the Sudanese model of 1989, because today Sudan is no longer a model even for the Sudanese themselves.

One hears also of the Iranian and theTalban models. As for the former, the world knows President re-elect Erdoğan was elected twice as a President and five times as a Party leader by the people and he did not come by a popular coup, on the contrary he survived one, nor an infallible Supreme Mullah leader.

There are several reasons why the West should accept the Turkish voters’ support of the President re-elect. Firstly, Turks have shown the world that they are able to choose their leaders through the ballot vote and not with bullets, and are united behind their leader, i.e., the July, 2016 coup was a clear message. Secondly, an intellectual and moral approach, the only way to obliterate the nuisance forces of ISO in the region, and demystify political Islam.

Thirdly, the Turks are engaged in a healthy process in the long run and one simply has to learn how to respect each other in order for the civil state to prosper. Finally, the Turkish liberals and secularists like their counterparts in Arab countries know “velvet and cocktail” democracy is not working for them, so they must reframe their message and actions in a horizontal partisan struggle close to the masses’ societal questions and moral values.

Today Arabs and Muslims in their countries are feeling the pride of all Turks, and it’s rather heartening to see a realistic legalist Nationalo-Islamist President elected by the people rather than dystopian criminals killing innocents in the name of Islam and anti-Western interest and values.