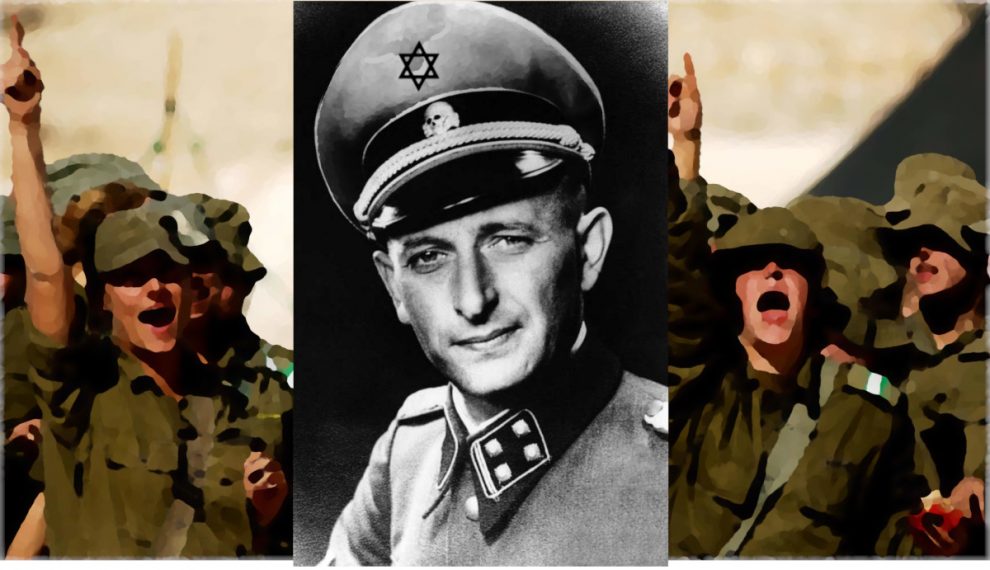 Otto Adolf Eichmann was a Nazi SS lieutenant colonel who organized the deportation of Jews to extermination camps during World War II. He escaped to Argentina after the war and was captured by Mossad, the Israeli intelligence service, in 1960. Found guilty of war crimes during a trial in Jerusalem, he was hanged in 1962. Hannah Arendt, a Jewish political theorist who fled to America due to the Nazi regime’s oppression in 1930, reported from Eichmann’s trial for The New Yorker magazine and wrote her famous book called “Eichmann in Jerusalem; A Report on the Banality of Evil” consisting of her court notes.

Arendt argues in her book that Eichmann neither felt guilty for his actions nor displayed hatred for those trying him and claimed he did his job as per orders and obeyed the law. Quoting from psychologists’ notes, Arendt says that Eichmann was not a psychopath, and quite contrary, he was mentally normal like an ordinary man. She then analyzed how a man banalizes mass murders with the orders of his commanders. According to Arendt, Eichmann acted with no mercy and conscience and never regretted his crimes. For Arendt, the Nazis brutal executions are not unique to them. Anyone with the same indoctrination in any society would see such evils as banal.

Eichmann was one of the perpetrators of Holocaust that left six million Jews killed. Many surviving Jews immigrated to Palestine and began to live in the newly founded Jewish state, Israel. More than six million Jews live in Israel now, the second country after America where Jews reside, thanks to Aliyah (immigration to Israel). Needless to say, the existence of the State of Israel, which claims to be on the land promised by God, is seen as a matter of existence for the Jewish nation, culture and religion.

However, Israel’s existence has become the reason for the gradual disappearance of the Palestinian state which gained its independence together with Israel but is now under occupation of it. The state of Palestine has not become embodied due to the occupation. It is a divided and non-independent entity with poor infrastructure, scarce water resources, high rates of unemployment and a semi-functioning government. In addition, hundreds of acres of lands are illegally and forcibly seized by Israel to build settlements every year. Moreover, the city of Gaza has become a prison due to the surrounding walls built by the Israeli government. Today Al Quds (Jerusalem) is almost under the control of the occupying state.

On the other hand, Israeli forces kill more than 500 Palestinians including their leaders, children, women and elders every year. Israel also has losses, but very few when compared to Palestinian casualties, however all deaths have a retaliatory cause. Being oppressed, tortured, abused, jailed or killed has forced Palestinians to clash with occupying troops and sometimes result in the killing of some Israeli soldiers.

Anyone analyzing the Israeli-Palestinian conflict who has read Arendt’s aforementioned book may find some similarities between Israel and Nazi Germany. Hitler’s goal of founding “ein volk ein reich” (one people, one realm) and occupying lands for “lebensraum” (living space) is the same as Israel’s establishing “Eretz Israel” and seizing new lands for their settlers. While for Nazis, the Aryan race is superior to others, for Israeli elites, the Jewish nation is privileged, superior and deserves to be served by other human beings. Even in terms of arms stocks, Israel is not less dangerous than Nazi Germany. There are arsenals of mortal weapons underground Israeli deserts. With such huge military power, allegations about their intention of invading other parts of “promised lands” might not be just conspiracy theories.

Perhaps, the most notable similarity can be found when mentalities are compared. Israeli troops have no mercy when they intervene peaceful protests. In so many incidents, soldiers reciprocated the stones of protesters with bullets and have killed and wounded many of them. Almost every Palestinian family has a killed, disabled or jailed member. Cruelty causes fury, fury turns into action, action faces persecution, hence, a continuous vicious circle comes into being.

If the conflict continues as it is now, gradual passivation of the Palestinian nation and full control of their lands will not last long. Many Israelis’ view of Palestinians are not more merciful than that of Eichmann or other Nazi officers. The Nazis did what was ordered and obeyed as their laws commanded them to. They thought they were right to kill Jews in gas chambers for the sake of their fascist cause and country. Massacring so many civilians was an ordinary duty for them and the crimes they committed were quite banal. As Arendt argues, simplification of committing crimes is not only unique to Nazi ideology. Anyone devoting himself to a racist ideology can do the same anywhere.

If we trace the paths of Arendt’s notion, we can argue that Zionism is no different than Nazism in many aspects, particularly for their demeanor against others they see as enemies. If we had a chance to try an Israeli soldier, e.g. surnamed Lieberman, and ask him why he killed Palestinians who were just protesting without any violation, he would call the victims terrorists and claim that they deserved to be killed. We know from indictments that many soldiers defended themselves with such excuses. For them, Arabs are threats to their security, welfare and future. None of them feel guilty for destroying the past (and the future) of the Palestinians.

What if Hannah Arendt was in the court in such an imaginary trial? Since she is deceased, it may not be fair to comment which side she would support, but supposing that she would be neutral in spite of her Jewish roots, she would probably say “Eichmann is still in Jerusalem.” Eichmann no longer lives but his mentality still exists in Israel. This time not Nazi Germany but Zionist Israel, not Eichmanns but Liebermans, Cohens, Levis… it is not Poland but Palestine that is invaded and again a nation is massacred. The only difference may be that while Israel kills in the course of time, the Nazis did it in a very short period of time.

The Jewish holocaust was illegitimate and perpetrators were punished with death penalties or assassinations conducted by the Israeli secret service. Israeli authorities may not (want to) be aware, but legitimizing the Palestinian massacre legitimizes the Holocaust as well. In both cases an ethnic group is cleansed due to inhumane reasons. Perhaps, many Jews will react to the comparison of both cases, as their hatreds does not let them think logically. Yet, truths do not change even if you deny them – like the sun does not disappear when you close your eyes. Eichmann’s soul is living in the body of many Israelis and evil is banal in Israel, too.